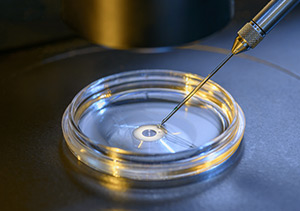 The ovaries are minimally stimulated (meaning less fertility medications used to make the ovaries produce eggs). Unlike traditional IVF where eggs are retrieved as close to ovulation as possible, IVM captures the eggs much sooner when they are still “immature.” The eggs are “matured” in the laboratory for about 24 to 48 hours using a culture medium containing small amounts of hormones.

Once mature, the eggs are fertilized using intracytoplasmic sperm injection (ICSI) – a very tiny needle containing one sperm is directly injected into the egg. The resulting embryos are transferred to the woman’s uterus.

Women who typically benefit the most from IVM include women who are at higher risk for ovarian hyper stimulation syndrome (OHSS), including women with polycystic ovarian syndrome (PCOS).

Advantages of IVM include:

Disadvantages of IVM include: