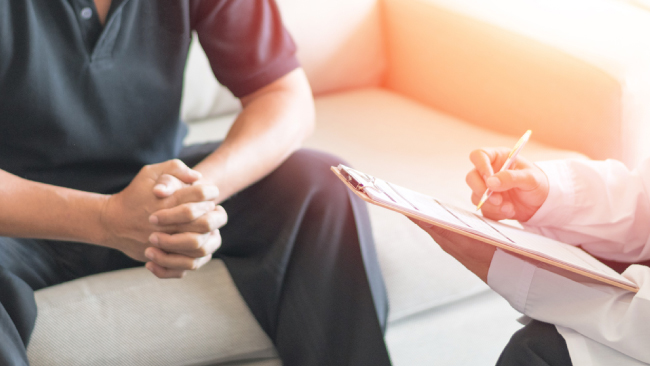 Erectile Dysfunction (ED) is a persistent inability to achieve or maintain an erection that is firm enough to have sexual intercourse.

In a study from John Hopkins Institute in 2007, the overall prevalence of ED in men aged above 20 years was 18.4% suggesting that ED affects 18 million men in the USA. Among men with diabetes, the prevalence of ED was 51.3%, so it’s a fairly common problem.

Premature ejaculation is when semen is released sooner than a man or his partner would like. PE might not be a cause for worry. But, PE can be frustrating if it makes sex less enjoyable and impacts your relationship.

A study looking at 500 couples from five different countries found the average time taken to ejaculate during intercourse was around 5 minutes. However, it's up to each couple to decide if they’re happy with the time taken – there’s no definition of how long sex should last. Occasional episodes of premature ejaculation are common and aren't a cause for concern. However, if you're finding that around half of your attempts at sex result in premature ejaculation, it might help to get treatment.

There are many reasons why men have PE. There can be biological, chemical, and/or emotional reasons. There may be issues with the brain signals that rule sexual excitement.

Common treatments are behavioral therapy, tablets and creams. Many people try more than one option at the same time.

Medical Therapy: They lower serotonin levels. You’ll usually be advised to take it one hour before sex, but not more than once a day. Your response to the treatment will then be reviewed after four weeks (or after six doses), and again every six months.

Numbing Creams or Sprays: There are creams and sprays that you can put on the head and shaft of the penis before sex to lower sensation. They also cause vaginal numbness, so they should be washed off before sex.

It happens when semen travels backward into the bladder instead of through the urethra (the tube that urine passes through).

Men with retrograde ejaculation still experience the feeling of an orgasm and the condition doesn't pose a danger to health. However, it can affect the ability to father a child.

Prostate gland surgery or bladder surgery is the most common cause of retrograde ejaculation. Other causes are diabetes, multiple sclerosis, and a class of medicines known as alpha-blockers, which are often used to treat high blood pressure (hypertension).

Most men do not need treatment for retrograde ejaculation because they are still able to enjoy healthy sex life and the condition does not have adverse effects on their health.

Men who want to have children can have sperm taken from their urine for use in artificial intrauterine insemination (IUI) or in-vitro fertilization (IVF).

One must give it time. On the other hand, there are chances of multiple births, i.e, if more than one embryo is transferred into your uterus. The use of multiple embryos is done to increase the chances of conception. Stress can also be brought on by the length of the process, hormonal changes, and medication.

The chances of a fetus born with malformation is similar to natural conception.

Hypogonadism can occur at any age. The symptoms will be different depending on your age when it develops. Common symptoms in adult men include:

Male hypogonadism is diagnosed based on:

Penile curvature could be from birth (congenital penile curvature) or acquired later in life (Peyronie’s Disease). One will usually notice a curved penis only during the penile erection and not when the penis is flaccid (resting state).

Congenital penile curvature although present since birth will become obvious during erection when he reaches puberty or early adult life.

Peyronie’s Disease is caused by the way a person’s body heals wounds. Injury or damage to the outer tissues of the penis causes scar-like tissue (plaque) to form.

“Peyronie’s was named after the French surgeon François Gigot de La Peyronie, who described it in 1743”

PEYRONIE’S DISEASE IS NOT A DISEASE YOU CAN CATCH FROM SOMEONE ELSE AND IT IS NOT CAUSED BY ANY KNOWN DISEASE THAT CAN BE PASSED TO OTHERS.

Peyronie’s disease usually occurs in two phases — the acute (or active) phase and the chronic (or stable) phase. The first painful phase can last up to about 18 months. For most men, the chronic, or stable, phase begins 12-18 months after symptoms first appear.

Signs of Peyronie’s disease may involve:

Non-surgical treatments may include tablets, penile traction devices and shots/injections directly into the plaque which brings higher doses of the drug directly to the problem.

Surgery is an option for men with severe penile curvature that find it difficult to have sex. There are three surgeries used to help men with Peyronie’s Disease:

Priapism is a rare condition involving an erection that lasts for an unusually long time. It can be painful. This type of erection is not related to sexual stimulus. Immediate treatment is important to prevent tissue damage and erectile dysfunction (ED).

Priapism got the name from Priapus. Roman statue showing Priapus – the god of fertility. The distinguishing feature of the deity is the great erect penis, which was to symbolize the economic well-being of the owners of the House of the Vettii in Pompeii.

There are two types of priapism:

Priapism happens when blood flow to the penis doesn’t work correctly. Some things that could cause this are:

WHY IS TREATMENT IMPORTANT?

Ischemic priapism (most common, 95%) calls for emergency care. Blood must be drained from the penis. There are several ways to do this:

Nonischemic priapism (less common, 5%) often goes away without treatment. Simple ice and pressure on the perineum may help end the erection. A watch and wait approach is used before surgery.